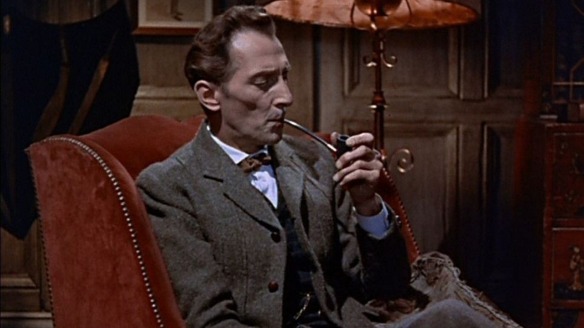 Like my fascination with folk horror, I can trace my interest in Terence Fisher to my early teens, when I stayed up late to watch a TV screening of Curse of the Werewolf. Hoping for something lurid and fast-paced, I both did and didn’t get what I bargained for, as a slow-burning film – that seemed less a horror and more a sadistic tragedy – unfolded. I shrugged and forgot about it, but thanks to regular TV screenings, I soon became hooked on Hammer’s brand of horror, and Terence Fisher’s name kept coming up again and again. I would agree with author Wheeler Winston Dixon, who argues in the recently published The Films of Terence Fisher that Fisher, who revitalised the horror genre with lean, hard-hitting adaptations of Frankenstein, Dracula, and other canonical works of fantastical literature, is the prime cause for the revival of the Gothic sensibility in film in the second half of the twentieth century and beyond. Directors as diverse as John Carpenter, Guillermo del Toro and Tim Burton are indebted to him.

This new release updates the long out of print Terence Fisher: The Charm of Evil, which was the first book-length study of this director. The new book was the occasion for me to re-watch many Fisher favourites and to take a first look at many of his lesser-known works. The latter especially, since the book devotes as much time and effort to the films he made for Highbury and Gainsborough, and to Fisher’s pre-Frankenstein work at Hammer, as it does to his famous horrors, which he preferred to see as “fairytales for adults”, hinting at the allegorical dimensions of his films.

Fisher, as Dixon points out in the introduction to this book, is usually regarded as a journeyman director. Ironically it is French cinephiles, so often preoccupied with the finicky distinction between the director as auteur and the director as mere metteur-en-scene, have most often thought of Fisher as a director with a recognisable worldview and a a distinguishing visual style. But while an auteurist might try to insist that all of his films conform to some overarching schema, Dixon argues that Fisher worked on some projects that captured his imagination and into which he put all of his creative efforts, and other projects which he dashed off quickly. This seems an eminently believable hypothesis, especially when, as Dixon points out, one considers that Fisher made the unremarkable Kill Me Tomorrow in 1957, the same year as he made his career-making The Curse of Frankenstein, a film that jettisons the campiness of earlier versions to create a faithfully unfaithful adaptation that manages to be fluidly cinematic and yet as intimate as a kammerspiel.

Rather than examine Fisher’s work thematically, as Paul Leggett’s book does, positioning him as an explicitly Christian director who depicted the struggle between good and evil again and again in recurring variations, or provide a biography of the man and his work (though Dixon did interview Fisher’s widow, and provides sundry biographical and contextual asides throughout) the book’s primary concern is to consider how artistically successful Fisher’s work is. After discussing Fisher’s reputation in the book’s opening pages, Dixon moves to describe the director’s early life and work, charting his rise from clapper boy to editor to directing his first clutch of films, beginning in 1947.

The second chapter chronicles Fisher’s move to Gainsborough Pictures, where he met the cinematographer Jack Asher, who would go on to work on some of Fisher’s best-known films. Chapters three and four address the variety of genre films Fisher made while at Hammer, often built around imported Hollywood stars such as Richard Conte, Paulette Goddard and Paul Heinreid. Informed readers will likely agree with Dixon that the curious science fiction-inflected melodrama Four Sided Triangle (1953) represents an artistic turning point.

In the film, two scientists based in a sleepy home counties village develop an invention that’s some kind of cross between a 3D printer and Alexander Mackendrick’s white suit, intended to benefit mankind through its ability to duplicate. Both in love with their assistant (the luminous Barbara Peyton, again an on-loan star from Hollywood), the jilted one uses their invention to create a copy of her, thus making their love triangle four sided – and yes, Dixon does acknowledge the clunking sexism that pervades this film. Though Four Sided Triangle drags in places, it is remarkable for its prefiguring of Fisher’s later Frankensteinian themes – both speculative and metaphysical – especially of course Frankenstein Created Woman.

After ploughing through Fisher’s work at Hammer; everything from crime to comedy, Dixon begins to parse the films thematically rather than chronologically. A chapter on Fisher’s five Frankenstein films is followed by one on the three Dracula films he directed. In the Frankenstein chapter, Dixon outlines how an unlikely, somewhat ramshackle project developed into the runaway hit The Curse of Frankenstein, before going on to consider the sexual and voyeuristic themes raised by the series. Dixon also notes a change at Hammer studios, citing producer James Carreras’s increasing insistence on more decontextualised gore and sexual violence, which put Fisher’s (usually) more measured handling of horror material out of style. This change of mood culminated in  Fisher’s final film, the pitch-black Frankenstein and the Monster from Hell, a film that successfully combines Hammer’s renewed emphasis on sleaze and shocks with Fisher’s own apocalyptic preoccupations.

The penultimate chapter, “satellite projects” brackets what Dixon considers to be Fisher’s less artistically successful post-Frankenstein works together. He includes the high-Gothic atmospherics of The Mummy and the grand-guignol The Curse of the Werewolf alongside the two appalling films he made in a period when he was out of favour with Hammer after the box-office failure of The Phantom of the Opera. The ungainly Euro potboiler Sherlock Holmes and the Deadly Necklace was rightly despised by both its star Lee and Fisher himself, who complained that producer meddling resulted in an uncinematic dirge. Then there’s the excruciating, fatuous, patronising (I could go on…) old dark house farce The Horror of it All, made with an on-the-scrounge Pat Boone, a film that is closer in sensibility to AIP’s inane “beach party” pictures than anything else in Fisher’s post-Frankenstein career. To group these two travesties along with some of his most interesting work seems eccentric, if not contrarian.

Since Fisher’s directing career lasted until 1974, and he only began the Gothic work he’s best known for in 1957, it’s hard to say when Fisher’s “late style” would begin. Arguably though 1959’s The Hound of the Baskervilles is Fisher in his prime period, with newly discovered artistic confidence and (comparatively) lavish on-screen budget rather than a product of “late style”, with all the discontinuities, anachronisms and digressions that term implies. The book’s final chapter though, seems to group some of Dixon’s personal favourites under the rubric of “late films.” Along with Baskervilles, he considers the gorgeously mounted but plodding Sword of Sherwood Forest, the sadistic, febrile Stranglers of Bombay, the spare, post-apocalyptic The Earth Dies Screaming, and the Gothic films The Gorgon and The Devil Rides Out.

Because the book’s aim is primarily critical, and because the book is structured around Dixon’s own idiosyncratic value judgements, readers may find their own opinions of Fisher’s films butting against Dixon’s pithily expressed, sometimes contrarian discernments. In addition, some of Fisher’s well-known films are passed over quickly while others are discussed at length. Baskervilles in particular is given a too-long discussion based largely around its (admittedly remarkable) opening sequence. Throughout the book, certain peccadilloes lie in wait for pedants, such as when he describes the central couple in Stranglers as being in “their late fifties, rather than the usual young ingenue and her suitor.” While Guy Rolfe was squarely middle-aged in 1959, Jan Holden was still in her twenties (thanks to Jonathan Rigby for pointing this out), and if not quite an ingenue, her performance nonetheless marshalls that English rose wholesomeness typical of female leads in Hammer films of the period. Especially hawk-eyed readers may notice a few more such oversights.

Furthermore, despite the chance to revise the text in the intervening decades since The Charm of Evil‘s publication, a thorough scouring of the bibliography reveals that Dixon has cited little post-1991 scholarship on Fisher, omitting – for example – Leggett’s theologically-inflected work on Fisher (Leggett considers Fisher as a member of a long tradition of Christian apologists who used the fantastic to articulate their ecclesiastical concerns) and Marcus K. Harmes’s informative, insightful short book on The Curse of Frankenstein.

Of great value is the way that the book charts Fisher’s growth and increasing confidence as a director. Also of value are the descriptions and discussions of his pre-Curse of Frankenstein films, many of which are still tough to track down. But of his readily available films, perhaps more contextual analysis and discussion would benefit the reader, rather than the painstaking scene-by-scene renderings that increasingly come to dominate the book.

Looking back over Fisher’s career, it seems immense, sprawling, hard to categorise. Considered in terms of the “standard version” of film history, he falls awkwardly between the classic American studio era and the now institutionalised rebellion of the New Hollywood. Beginning his career in the unglamorous era of quota quickies, and finishing it in the sleazy seventies, he was also a Brit who never worked in the USA, and who toiled away in disregarded genres like horror, long before the movie brats gave such genres a veneer of respectability. A victim of history and of circumstance then, who, as Dixon notes, was barely acknowledged in the press on the occasion of his death. True, he bashed out face-palmingly appalling tripe at times, but his most accomplished films have a clarity, and – most importantly – a luxuriant atmosphere, one conjured up by his knack for period detail and his subtle, supple camera movements. With increasing frequency, tributes are being paid to the Fisher king.